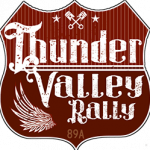 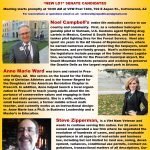 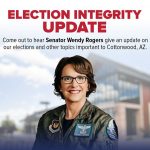 Join us on May 7th as we host Senator Wendy Rogers. It will be a fun and informative event as  Senator Wendy Rogers, endorsed by Donald Trump, brings us up to speed on the “Real Story” behind the politics in Arizona and the nation. With her energetic and enthusiastic style of reporting the facts, you […]

Join us on June 4th as we host a number of CD2 US Congress candidates – Eli Crane, Mark DeLuzio, John Moore, Ron Watkins, Andy Yates and Steven Krystofiak. It will be a lively event with all of these candidates competing for the same position – U.S. Congressman Republican Candidate, running against Tom O’Halleran. The […]

TELL OUR AZ POLITICIANS WHAT YOU THINK